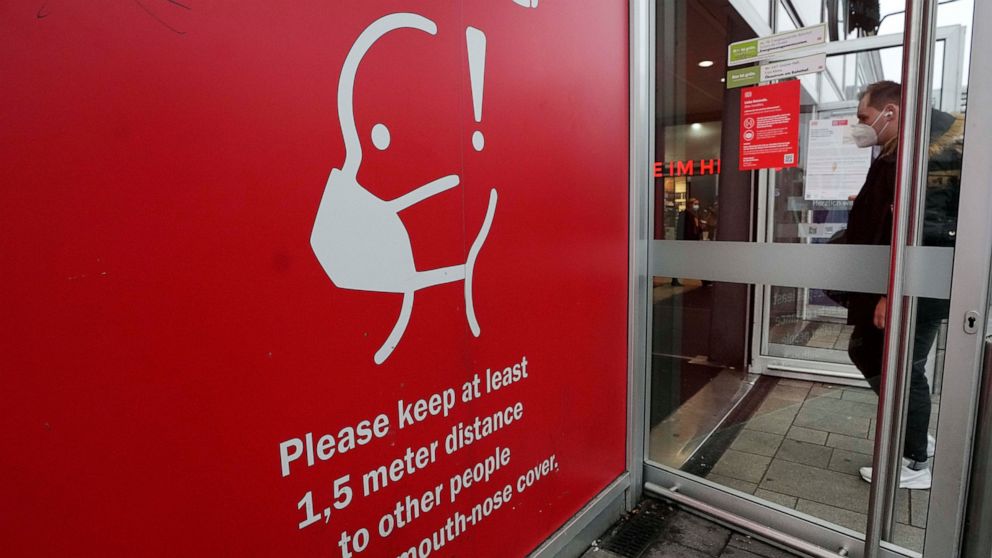 BERLIN — Germany approved new measures Thursday to rein in record coronavirus infections as Chancellor Angela Merkel called the pandemic situation in the country “very serious” and said it was “high time” to contain the spread of the virus.

“The situation is highly dramatic and it will be very important now that action is taken quickly, that action is taken consistently, that better control is taken,” Merkel told reporters Thursday night in Berlin. She had earlier held a videoconference with Vice Chancellor Olaf Scholz and Germany’s 16 state governors to coordinate the country’s response to a surge in coronavirus cases.

Merkel said participants in the meeting had agreed that tightening of measures against the virus would in the future be linked to the number of hospital admissions of COVID-19 patients per 100,000 people over a seven-day period. The states are also considering mandatory vaccinations for some professional groups such as medical staff and nursing home employees.

Earlier on Thursday, lawmakers in the Bundestag passed legislation to rein in the virus with votes from the center-left Social Democrats, the environmentalist Greens and the pro-business Free Democrats. The three parties are currently negotiating to form a new government.

The new measures include requirements for employees to prove they are vaccinated, recently recovered from COVID-19 or have tested negative for the virus in order to access communal workplaces; a similar rule will apply to public transport. The measures need to be approved by Germany’s upper house of parliament, the Bundesrat, which could happen Friday.

Outgoing Chancellor Merkel’s center-right Christian Democrats had wanted to extend existing rules that expire this month and which have served as the basis for numerous national and state-wide restrictions since March 2020. In the future, Germany’s 16 states will only be able to impose restrictions on cultural and sports events if their regional assemblies approve the measure.

Merkel’s party criticized the new rules, saying they would weaken the instruments at authorities’ disposal at a time when infections are soaring again.

“We are currently heading toward a serious emergency,” institute director Lothar Wieler said during an online debate late Wednesday. “We are going to have a really terrible Christmas if we don’t take countermeasures now.”

Wieler said Germany needs to increase its COVID-19 vaccination rate, which now stands at 67.7%, to significantly above 75%.

The eastern state of Saxony, which at 57.6% has the country’s lowest immunization rate, is poised to impose a limited lockdown in response to soaring infection numbers.

Official figures show Saxony had more than 761 newly confirmed cases per 100,000 inhabitants in the past week, the highest rate in Germany.

Germany’s independent vaccine advisory panel said Thursday that it recommends booster shots for all people over 18. Merkel said everything would be done to make available booster shots against the virus as quickly as possible. She said that about 27 million people needed to get a booster shot soon.

Wieler, the head of the disease control agency, warned that hospitals across Germany are struggling to find beds for COVID-19 patients and those with other illnesses.

Hospitals in the southeastern district of Rottal-Inn appealed this week for nurses and doctors to get in touch, saying it could use the help of “every hand (to) cope with this difficult situation.”

In the capital Vienna, officials sent unsolicited vaccination appointments to some 340,000 residents who haven’t yet received a shot.

Confessions of a Stay-at-Home Dad

Paced Bottle-Feeding: What It Is And How To Do It

Why It’s Important to Set Boundaries as a Parent

Feelings of depression and anxiety ‘increased sharply over Christmas’