The Three Nativities of the Three Christmas Masses 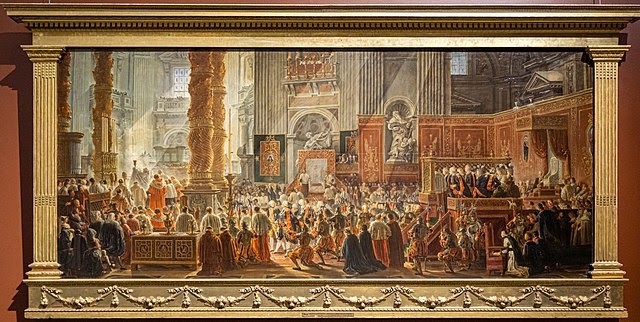 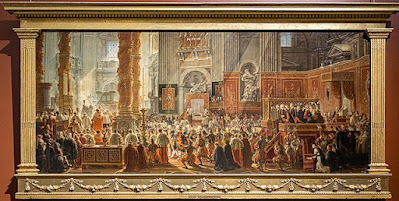 In the Summa Theologiae, St. Thomas Aquinas explains the tradition in the Roman Rite of having three different Masses on Christmas Day:

On Christmas Day… several Masses are said on account of Christ’s threefold Nativity. Of these the first is His eternal birth, which is hidden in our regard, and therefore, one Mass is sung in the night, in the Introit of which we say, “The Lord said unto Me: Thou art My Son, this day have I begotten Thee.” The second is His Nativity in time, and the spiritual birth, whereby Christ rises “as the day-star in our hearts” (2 Pet. 1, 19), and on this account the Mass is sung at dawn, and in the Introit we say, “The light will shine on us today.” The third is Christ’s temporal and bodily birth, according as He went forth from the virginal womb, becoming visible to us through being clothed with flesh: and on that account the third Mass is sung in broad daylight, in the Introit of which we say, “A child is born to us.” Nevertheless, on the other hand, it can be said that His eternal generation, of itself, is in the full light, and on this account in the Gospel of the third Mass mention is made of His eternal birth. But regarding His birth in the body, He was literally born during the night, as a sign that He came to the darknesses of our infirmity; hence also in the Midnight Mass we say the Gospel of Christ’s Nativity in the flesh. (III.83.2)

In sum, Aquinas claims that:

Aquinas looks to the Introits of each Mass in support of this interpretation, but the Collects of the Christmas Masses also fit the same pattern–more or less.

The Collect of the Midnight Mass is:

Which I translate as:

O God, who hast made this most sacred night to shine with the brightness of the True Light, grant, we beseech: that we who have known the mysteries of His light on earth may also relish His joys in Heaven. Who with Thee.

On its own, the Collect is a reference to the tradition that Our Lord was born in Bethlehem in the middle of the night, but juxtaposed with the Introit (“Thou art My Son, this day have I begotten Thee”), it can also betoken the Son’s eternal generation from the Father. To know the mysteries of the Light is to know that that Light proceeds from the Father for all eternity and to know that the Beatific Vision, where we “relish His joys in Heaven,” consists of seeing that eternally Begotten Light face to face.

The Collect of the Dawn Mass is:

Which I translate as:

Grant, we beseech Thee, almighty God: that we, upon whom is poured forth the new light of Thy Incarnate Word, may show forth in our work that which shineth by faith in our minds. Through the same our Lord.

With the spiritual birth of Christ on our minds, the Collect can be seen as a gloss on this mystery. The Incarnation in the womb of the Blessed Virgin Mary makes possible Christ’s temporal birth in Bethlehem, and Christ’s temporal birth makes possible His spiritual birth in our hearts. With the Light now born internally in our hearts, we ask that it show forth externally in our work.

The Collect of the Daytime Mass is:

Which the St. Andrew’s Daily Missal translates as:

Grant, we beseech Thee, almighty God, that the new birth in the flesh of Thine only-begotten Son may set us free, whom the old bondage doth hold under the yoke of sin. Through the same our Lord.

The Collect focuses on the historic birth of Jesus Christ in Bethlehem (rather than His eternal generation or His spiritual birth in our hearts) as the agent of our liberation from the yoke of sin. Note the pleasing contrast between the new birth of our Lord and the old bondage of sin. The Collect also has a precise use of prepositions. Jesus Christ is literally born “through the flesh” (per carnem), and “through” is a preposition hinting at motion. Christ’s divinity fully assumes and suffuses His humanity, which then passes through the flesh of His Mother when He is born. We, however, are held down fast under the yoke of sin (sub peccati jugo). A yoke is supposed to be a tool of motion, making it possible for a plow or cart to move, but unlike the sweet yoke of Christian discipleship (see Matt. 11, 30), there is no real movement under the yoke of sin. The old slavery keeps us stuck in our ways and trodden down, until the enfleshed Word, unleashed upon this sunken world, sets us free.

How to Talk to Your Child About a Pet Dying